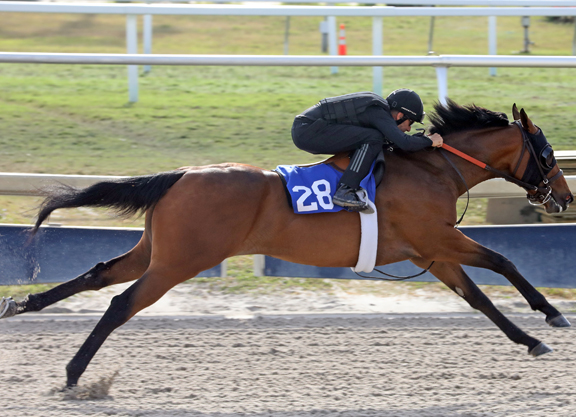 HALLANDALE BEACH, FL – After a year’s absence, 2-year-olds were once again breezing at Gulfstream Park Monday ahead of Wednesday’s Fasig-Tipton Gulfstream Sale. The auction’s under-tack show began at 9 a.m. with sunny South Florida skies and temperatures in the upper 70s. It continued past 3 p.m. as the thermometer reached the mid-80’s, and the winds picked up throughout the day, with a noticeable headwind in the later grouping of five sets. The bullet times for both the furlong and quarter-mile works were both recorded during the day’s first set, with a colt by Nyquist (hip 28) blitzing the eighth-of-a-mile in :9 4/5 for Wavertree Stables and a filly by Arrogate (hip 113) going the quarter-mile in :21 1/5 for Tom McCrocklin.

“I thought we had a really outstanding display of talented racehorses on the racetrack today,” Fasig-Tipton President Boyd Browning, Jr. said Monday afternoon. “Consignors have been very positive prior to the breeze show with how the horses had been training on the farms and how they prepped here and they sure showed up today. We were very encouraged by that and we expect the barn area to be very busy tomorrow and most of the day Wednesday before the sale starts.”

While Browning acknowledged conditions were more difficult as the day progressed, he said he would expect astute buyers to make allowances for horses who worked in the later sets.

“Weather is a variable that you can’t control,” he said. “But the one thing I know is that buyers are smart enough to know which set horses worked in. The later sets worked into a little bit of a headwind. I wish we had a controlled environment, but we don’t. All in all, I thought the track was pretty consistent. We saw some exceptional works even in the last set. I have a high level of confidence that the buyers take into consideration the various elements when they evaluate how horses work.”

“I think all of the right faces were here and apparently all of the suites were full upstairs too,” Browning said. “We had a ton of interest pre-sale. I think people are excited to be back into the sales process and a little bit more normal setting and environment. I know we missed being here last year and are thrilled to be back.”

Browning continued, “It was a spectacular day of racing here at Gulfstream Park on Saturday which certainly helps set a positive mood. And we are heading into Derby and Oaks Fever and I think people are generally excited about racing and the owners are happy to be able to go back to the racetrack and fans are almost able to go back. I think people are generally upbeat.”

The breeze show’s fourth set was interrupted by a freak accident when a colt by American Pharoah (hip 47) scheduled to work over the inner turf course tossed his rider and turned and ran the wrong way up the course. The colt ran into the rail, injuring himself significantly before dazedly walking into the infield’s lake.

“It was an unfortunate incident,” Browning said. “The incident occurred before the horse breezed. The horse dropped its rider and ran through the rail and suffered a catastrophic injury. We are highly committed to doing things in the safest manner possible to take care of both horses and humans. I don’t know of anything that could have been done to prevent this accident. We give our deepest sympathy to the connections and for the horse and we are deeply sorry this occurred.”

The Fasig-Tipton Gulfstream Sale will be held in the track paddock Wednesday with bidding scheduled to begin at 2 p.m.

A colt by GI Kentucky Derby winner Nyquist (hip 28) earned the fastest furlong time during Monday’s under-tack show at Gulfstream when covering the distance in :9 4/5 early in the day’s first set. Consigned by Ciaran Dunne’s Wavertree Stables, the bay colt is the first foal out of Spinning Wheel (Smart Strike), a half-sister to multiple Grade I placed Ride on Curlin (Curlin). The juvenile was purchased by the Red Wings pinhooking partnership led by Paul Reddam–who campaigned the colt’s 2011 Derby-winning sire–for $ 160,000 at last year’s Fasig-Tipton Selected Yearlings Showcase.

“He’s different,” Dunne said of the colt. “He’s been a special horse from day one. Mentally, he’s like a pony around the barn. He does everything right. Thankfully, it worked out for him today.”

Wavertree Stables was represented by 20 horses during the under-tack show.

“It was about like we expected,” Dunne said of the results. “The horses early on obviously had a distinct advantage. I would say the first two sets obviously got the best of the conditions. The track was a little faster and there was more moisture in it and there was no headwind. It got a little tougher as the day went on. I think anybody who was up there will realize that. Maybe we were disappointed with some of the horses who went in :10 3/5, but I think they are nice horses and when they come to the barn, they will pull them out because people will realize what the conditions were. The horses in the first two sets performed about like what we hoped–it’s hard to say thought–they would. We thought they were a good group of horses coming in here and they showed up.”

In addition to the bullet furlong worker, Wavertree was also represented by a pair of juveniles sharing the second-fastest furlong time. A filly by American Freedom (hip 154) worked in :10 flat and a colt by Uncle Mo (hip 67) equaling that :10 flat time.

Dunne has already had Gulfstream sales success with the colt’s family. Out of Afleet Maggi (Afleet Alex), hip 67 is a full-brother to Dream Tree, who sold through the Wavertree consignment for $ 750,000 at the 2017 auction and went on to win the GI Starlet S. and GII Prioress S.

“He’s a special little horse,” said Dunne, who purchased the colt for $ 335,000 at last year’s Keeneland September sale, said. “He was a beautiful yearling I couldn’t believe they let us buy him.”

Asked if he saw similarities between the siblings, Dunne said, “Not a lot. They are both fast. That would be about the extent of it. He’s a smoother horse than Dream Tree was. Dream Tree was a little heavier and maybe a little courser. He’s a lot smoother horse. He’s a prettier horse than she ever was. He’s still just a baby. His ass is stuck up in the air and he has so much improvement left to do. There is no telling where he’ll end up.”

The Wavertree consignment is centrally located in the Fasig sale barn tents at Gulfstream and Dunne admitted he has been impressed by the quality of juveniles walking through the shedrows.

“We stand on the end here and everyone is stabled basically in the same spot and you watch them walk around,” Dunne said. “Physically they are a beautiful bunch of horses. Fasig has done a great job gathering them up. I would have to think there is something here for everybody. The traffic was good earlier in the week. So I would expect the sale will be solid.”

Consignor Tom McCrocklin wasn’t sure how fast his filly by Arrogate (hip 113) would work at Gulfstream Monday, but he knew she’d work well. The juvenile more than delivered with a bullet quarter-mile drill in :21 1/5.

“We loved the work,” McCrocklin said. “I thought it was beautiful. I try not to be a slave to the stopwatch, I like to look at the work and see how they move and switch their leads. Visually, I think it was very good. She breezed a quarter a week ago, and it was a very good work, so it didn’t come as a big surprise. I don’t clock horses–I never clock them at the farm and I don’t clock them here–so when they breeze, I feel like I know who can run, but literally the time is always a surprise to me.”

Hip 113 is out of graded-placed Flatter Up (Flatter) and from the family of Grade I winner Midnight Storm.

“She is more compact than you’d picture coming from an Arrogate,” McCrocklin said of the gray filly, who was purchased for $ 260,000 at the Fasig showcase last September. “I have a colt at the farm that is a big, scopey, stretchy kind of horse. She probably has a lot of that Flatter in her.”

McCrocklin sent seven 2-year-olds out to work Monday and the Ocala horseman agreed conditions were more difficult later in the day.

“It was tough conditions today,” he said. “I am not a whiney-baby about the track, the wind, the sun, but it was tough out there today. Big-time headwind, they could not keep enough water on the track. I felt like we got through about five to 10 breezes in a set and it was back where it was before.”

McCrocklin is already looking beyond Wednesday’s Gulfstream sale to a potentially exciting debut effort for a graduate Saturday at Santa Anita. McCrocklin consigned a colt by Speightster to last year’s OBS Spring sale on behalf of Solana Beach Sales. The chestnut colt sold through the ring for $ 1.1-million, but was turned back. Retained by Solana Beach, he was sent to Bob Baffert and has been working lights out at Santa Anita, according to McCrocklin.

“He has been working freaky, it’s scary how good he is working,” McCrocklin said of the 3-year-old now named Bobby Bo. “He is supposed to run Saturday on Santa Anita Derby day. I watch his breezes and the hair stands up on the back of my neck. He is phenomenally talented. He’ll run in Solana Beach silks–we had an offer to sell him from Spendthrift, but at the end of the day opted to keep him and run him. It’s like poker, sooner or later you have to turn your cards over. Bob Baffert is a pretty harsh judge of a horse and he sent me a one-word text that just said, ‘Beast.’” We’ll find out Saturday.”