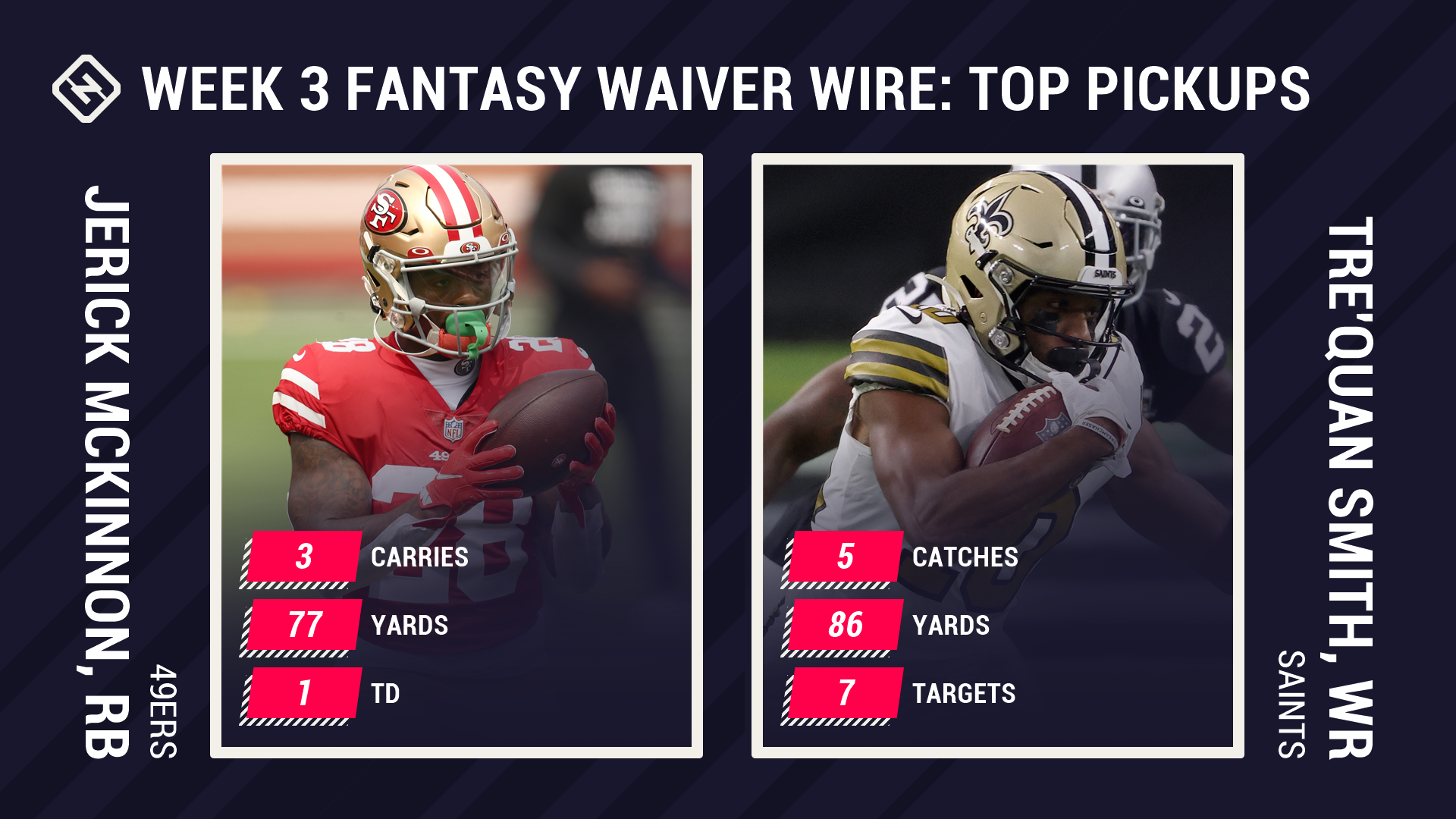 If you made it out of Week 2 with no significant injuries on your fantasy football team…then you’ll probably suffer some next week. Sorry, but it looks like that’s how it’s gonna go this year, at least early on. The only thing you can do is build depth to weather the inevitable injury storm. A good place to start is with our list of the top Week 3 fantasy waiver wire pickups. Grabbing some of the potential long-term contributors, like Jerick McKinnon, Dion Lewis, Darrell Henderson, Joshua Kelley, Tre’Quan Smith, or even Devonta Freeman, who isn’t even on a team right now, is a must. Even if you don’t feel the need to use a waiver claim, adding some free agents after waivers clear around 4-5 a.m. ET on Wednesday morning in ESPN and Yahoo leagues is worth your time.

Our full free agent list is loaded with players at every position. Many of the names on the list are because of injuries to more important teammates, so if players like Davante Adams, Sammy Watkins, Jamison Crowder, Tyrod Taylor, and Jack Doyle return sooner rather than later, their backups might not be worth that much. There are plenty of other players who are simply too talented to be owned in fewer than 50 percent of leagues or have guaranteed paths to more playing time, so take advantage of their availability. We also have some potential D/ST streamers at the end of this list. You can check our Week 3 kicker rankings if you need a new one or just really like reading lists of names.

This feels like a week where most people in your league will use a waiver claim. There are enough good RBs available that even if you aren’t reeling from injuries, you might want to jump in and grab someone. There are also several interesting WRs and TEs who could be worth waivering depending on your team needs. It’s tempting to sit out this waivers period and move up in the claims order, and while that’s never a bad idea if you have enough depth, this is also the type of period where you could move up the list again rather quickly. It all comes down to what you need for the short-term, but as we alluded to in the opening, just because the injury bug missed you this week doesn’t mean it won’t bite you in the future. Be prepared.

Unless otherwise noted, only players owned in fewer than 50 percent of Yahoo leagues considered.

Jerick McKinnon, RB, 49ers. After scoring in each of the first two weeks, McKinnon was already trending upward, but after it was announced Monday that Raheem Mostert (knee) and Tevin Coleman (knee) were both expected to miss Week 3 (and possibly longer), McKinnon might very well be the No. 1 waiver target this week. He’s unlikely to see 20 touches given his injury history, but 12-15 touches is reasonable. Against the Giants in Week 3, that could lead to RB2 numbers in PPR leagues. Jeff Wilson Jr. will handle a decent amount of carries and could be worth a free agent add in standard leagues, but McKinnon has potential long-term value in addition to his massive short-term upside.

Tre’Quan Smith, WR, Saints. Smith was expected to step up in the absence of Michael Thomas (ankle), and he did just that on Monday night, catching five-of-seven targets for 86 yards. It’s unclear how long Thomas will be out, but with Emmanuel Sanders struggling for the second straight week, it’s possible Smith has more of a role even when Thomas returns. He’s worth grabbing for a short-term boost.

Devonta Freeman, RB, FA. Freeman figures to sign somewhere this week given all the RB injuries. He’s scheduled to visit the Giants on Tuesday, and if he doesn’t sign there, he could draw interest from Carolina. Freeman averaged just 3.6 yards per carry with the Falcons last year, but he hauled in 59-of-70 targets for 410 receiving yards, so he’ll at least have value in PPR leagues. Even if Freeman is unsigned when waivers run on Tuesday night, he’s worth grabbing.

Frank Gore, RB, Jets. While everyone else in your league chases short-term fill-ins and committee backs, why don’t you grab a bona fide starter who received 21 carries last week? Oh, right — because he’s 37. Still, Gore is going dominate carries for the Jets in at least the next two games while Le’Veon Bell (hamstring) is out, and things open up a bit schedule-wise, with Indianapolis and Denver on tap for the Jets. Gore isn’t exactly a high-ceiling play, but he’s a worthwhile flex in standard leagues given his volume.

Gardner Minshew, QB, Jaguars. Minshew has shown both efficiency and a gunslinger recklessness in his first two starts this year, but there’s been one consistent element: Lots of fantasy points. Every year, fantasy owners stick with tried-and-true veterans while breakouts like Minshew put up points on the waiver wire. Get in early this year and grab Minshew now. He’ll likely post another big game on Thursday against the Dolphins, and he gets three more favorable matchups after that (@ Texans, @ Bengals vs. Lions).